skip to main | skip to sidebar

These days coins are produced on a large scale to meet the requirements of the users, resulting in Minting Errors on coins. The Mint weeds out these coins and puts them back to melting, but still many escape. These coins are known as Error Coins or defective specimens and are eagerly sought by collectors.

Lets check out what these Error Coins are and how do they look like?

The most common Errors in minting coins are:-
1. Discolouration of the Face.
2. Chipping of the surface.
3. Broken Edges.
4. Off-centre or double strikings.
5. Mis-stuck coins
6. Die rotation etc.

BROCKAGES (Lakhi Coins)
They are specimens of coins that are found with normal design on one side and the same design incused or stamped on the other side also. Remember the coin that Amitabh uses in movie Sholey with both sides having 'Heads'. They are also called as lakhi coins.

Why this happens?
This happens when the coin last struck in the chain getting lodged in the die and then another blank comes into position and is stuck. The second coin gets the normal impression on one side and the impression from the face of the previous coin(still stuck in the die) on the other.

I wonder how these got away ?

One Rupee was supposed to be minted on it !

MULTIPLE - STRUCK COINS
We also come across ‘multiple-struck' coins e.g. generally we see double struck coins/off centre coins. This happens as a result of a coin not being ejected from the coining press after the first striking, and getting a second strike. Then again, if the planchet slips out of place before striking, it receives an impression which is out of alignment. Off centre coin is a coin struck out of alignment, caused by the planchet slipping out of place before being struck. 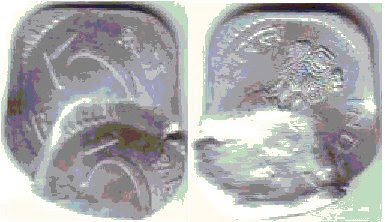 MULES
An interesting variety of mis-struck coins are the 'Mules'. This term is used to describe coins which have the obverse die of one coin and reverse die of another. Mules are sometimes produced at the time of re-striking coins of earlier periods/issues. Unless the obverse and reverse dies are properly paired at the time of restriking, the coins struck may have the wrong obverse or reverse. Most instances of 'mules' are found in coins of Queen Victoria, which bear dates 1877-1901 and yet have the legend Victoria Queen on the obverse. This one has Victoria Empress with date 1876.

1862 Rupee(4 dots) : In 1862 some rupee coins were minted by Half Anna die obverse. This probably happened as the size of rupee coin and Half anna coin was same. Half anna die was fitted to rupee minting operation and resulted in such interesting variety. Shown below are the mule with the original Half Anna. 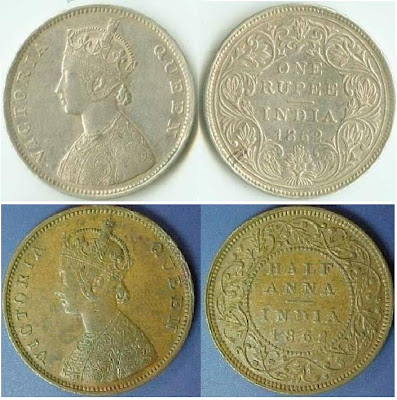 EDGE ERRORS
Another type of error come across are specimens with upright milling in coins which normally have a 'security edge', It should be noted, coins having 'security edge' are first struck with the usual upright, or straight milling at the time the obverse and reverse designs impressed upon them. These are next passed through a second press where the indented groove is put on the edge, under pressure, while being fed into the second machine, if a few coins accidentally skip the press, unless weeded out at the Mint, these may go a circulation with normal upright milling.

"The uniface 1918 rupee, with its milled edge, is a genuine Mint error. I have no doubt that it was the lower of 2 planchets which arrived in the striking chamber at the same time" - Bill Snyder (http://www.worlderrors.com/) Thanks Bill. 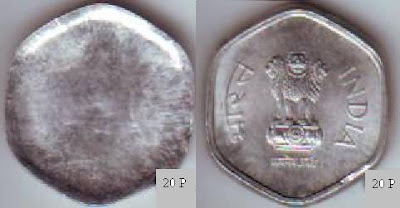 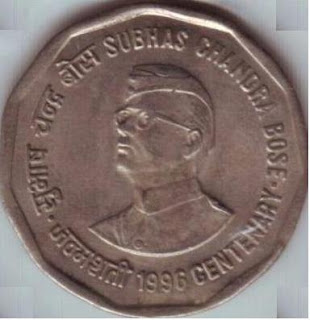 DIE ROTATION ERROR : The Obverse Die rotation to Right Side 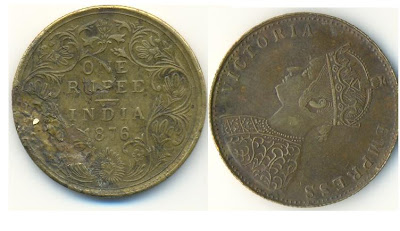 Die Rotation is a minting error in which the Obverse/reverse Die is rotated, anywhere from 5-180 degrees clockwise or anticlockwise.

Some 1835 1/4 Anna coins are found with 180degree rotation, but they are not errors. They were minted like that, as the british way of seeing the other side of the coin was to flip the coin upside down rather than sideways.

DIE CRACK ERROR: When coins are minted using broken die or if during the minting process the die breaks/chips, the coins minted in that process are known as die crack error coins. 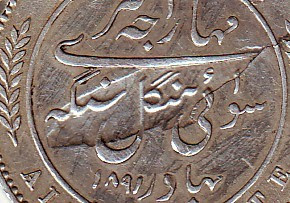 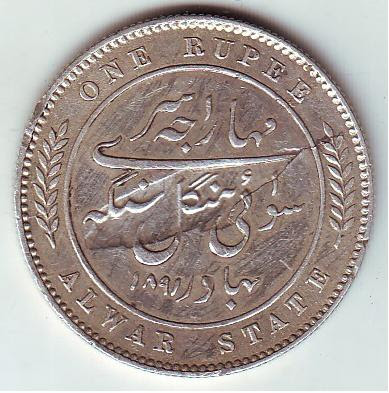 GHOSTING ERROR : The impression of the obverse die is seen on reverse side also.

Can anyone tell what happened to this coin??? 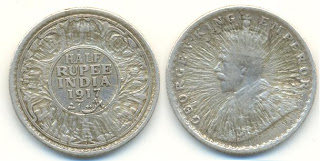 You are visitor Number

Dr P V Bharat
A Doctor and a Numismatist